I am reading a book called "Flesh" by Khanh Ha. FTC disclosure: I received a free copy of this book in exchange for an honest review of it. I will publish the full review on June 18, 2012.

I am not too far into the book yet, but I am far enough in to know that it is set in north Vietnam at the turn of the 20th century (actually it also says that on the dust jacket!)

So, in the book the people that we read about are called Annamese. Why are they not called Vietnamese? Also, I am wondering whether Annamese has anything to do with animal worship(?)

It took a little while to get information because I found out that an Annamese is someone from Annam, and THEN I was able to get the following definition of Annam from Wiki: 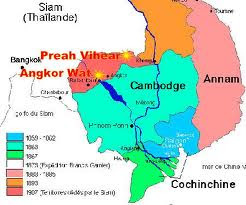 "Annam (Vietnamese: An Nam) was a French protectorate encompassing the central region of Vietnam. Vietnamese were subsequently referred to as "Annamites." Nationalist writers adopted the word "Vietnam" in the late 1920s. The general public embraced the word "Vietnam" during the revolution of August 1945. Since that time, the word "Annam" has been regarded as demeaning."

The word is now demeaning, but this is a period piece.

I had not realized that the name 'Vietnam' came on the scene so late in history.

I have prepared this post as part of Wondrous Words Wednesday, a meme hosted by BermudaOnion.net where we discuss 'new to us' words that we come across in our reading.
Posted by Libby at 7:33 AM