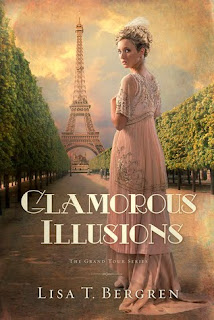 I recently read "Glamorous Illusions" by Lisa Bergren. It is the first book in her 'Grand Tour' series, and the idea of taking the Grand Tour has always seemed exciting to me! More about the Grand Tour later, but first take a look at the book summary that I received, so you can get an overall idea of the book's plot:

It was the summer of 1913, and Cora Kensington's life on the family farm has taken a dark turn. Not only are the crops failing, so is her father's health. Cora is carrying on, helping her mother run their Montana farm until a stranger comes to call, and everything changes. Cora then learns a secret that will radically change her future: she is the illegitimate daughter of a copper king who has come to claim her.

Cora is invited to take the "Grand Tour" of Europe, a journey intended to finish a person's education, to solidify an understanding of ancient culture and contemporary refinement. As she travels from England to France with half-siblings she's never known, Cora encounters the blessings of the Kensington family name, as well as the curses. But when an unbidden love begins to form, she realizes the journey is only beginning.

Faced with the challenge of accepting her father, new family, and the identity that comes with it, Cora also struggles to accept that she is also the daughter of the one true King-a Father who is the only One who can truly heal.

FTC Disclosure: I received a copy of this book in exchange for an honest review of it.

So, as I said earlier, overall I am excited about this book and the idea of a Grand Tour series. Here is a description of what the Grand Tour entailed from the Metropolitan Museum of Art's website:

Beginning in the late sixteenth century, it became fashionable for young aristocrats to visit Paris, Venice, Florence, and above all Rome, as the culmination of their classical education. Thus was born the idea of the Grand Tour, a practice which introduced Englishmen, Germans, Scandinavians, and also Americans to the art and culture of France and Italy for the next 300 years. Travel was arduous and costly throughout the period, possible only for a privileged class—the same that produced gentleman scientists, authors, antiquaries, and patrons of the arts.

See? Doesn't that sound great? Why did this practice stop? We were robbed!! (Actually, this book begins in 1913 and I think WWI will start pretty soon, which would interrupt tour schedules...)

It is enchanting to visit the capitals of Europe with Cora, her half-siblings and her handsome escort! Cora is a very likable young woman. The siblings and their friends have only just found out that Cora even exists, and some of them are having trouble dealing with the embarrassing situation. But, even these characters you do not dislike too strongly, because their embarrassment is understanding given the times.

Actually, the only slight wrinkle for me was that I was shocked when I found out that she was illegitimate; I wondered how realistic that was. I am not prudish - I just did not know that these things happened in 1913...but, that may be naive of me.

Other than that, I found the book to be a light, enjoyable read, and I look forward to reading the next in the series!


What is our "true" identity? Join the conversation at Lisa Tawn Begren's
Glamorous
Illusions Author Chat Facebook Event
Page. On the evening of 6/27 we'll gather to talk about our spiritual journey,
share our stories and a few laughs.


In the meantime, celebrate with Lisa by entering her Glamorous Illusions
Giveaway!

One "glamorous" winner will receive a "Glam Prize Pack":

Enter today by clicking one of the icons below. But hurry, the giveaway ends
6/26/12. Winner will be announced at Lisa's
"Glamorous Illusions" Facebook Party on  6/27 {Fun begins at 5pm
PDT / 8pm EDT}. Lisa will be hosting an evening of meaningful chat, fun trivia,
laughter, and encouragement - bring your friends! She'll also be giving away some
GREAT prizes: gift certificates, books, and a Book Club Prize Pack! (Ten copies of the
book for your small group or book club and a live chat with Lisa via video or phone.)

So grab a few of your friends and your copy of Glamorous Illusions and join Lisa
on the evening of June 27th for an evening of fun.

Don't miss a moment of the fun. RSVP
TODAY and tell your friends via FACEBOOK or TWITTER and increase your chances of winning. Hope to
see you on the 27th!
Posted by Libby at 8:25 PM