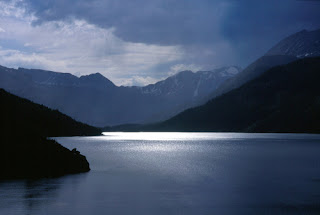 I had hiked to Mystic Lake several times, and this hike started the same as all the others. The only difference was that this time we had a small child with us, my little sister, Mary.

Our family was living in Montana at the time. My younger brother and I were junior high age, but my sister was only about three. Our dad was the fourth member of our little hiking party.

We made it up the mountain path to Mystic Lake, uneventfully. It was a stunningly beautiful place. We rested by a waterfall for a while. But, my dad was anxious to start back. If I remember correctly it was about a three hour hike and he was worried that it would start getting dark soon.

We started walking. As we had on the way up, we were leaving the trail once in a while trying to find more gentle slopes for my sister. We would take these little detours and then hook back onto the trail. We were going through mostly a rocky alpine terrain - not a thick forest - so it was not as though there were a well-marked trail to follow anyway.

The entire time that we were hiking we all kept up a lively discussion. If you knew my family, you would understand! We are all very talkative.

So, between the detours and lively conversation, we suddenly all realized that it had been a while since we were on the actual path. We became mildly worried.

We tried sliding straight down the rocks to see whether we would hit a switchback. But, we didn't.

We knew that we needed to be heading generally downward, because the lake was at a high altitude and we had been hiking up almost the entire way there. So, we kept picking our way down while at the same time trying to find the trail.

It started it get dark and we all started to speculate about bears. It was just twilight when we came to a river.

My dad said that we would follow the river downstream. He told us that whenever you are lost and you come to a river, you should always follow it downstream and it would always lead somewhere.

So, we followed the fast-moving mountain stream. It was getting fairly dark when we saw the lights on the other side. There were too many lights for it to be someone's house, but too few for it to be a town. It really did not matter what it was, we needed to get over there.

My dad held my sister up high and started to wade across the fairly narrow, but swiftly moving stream. My brother and I followed.

My brother is now over six feet tall, but this event occurred before he hit is teenage growth spurt. He was pretty short. When we got to the middle of the stream, I glanced back at him. Only his upturned face was visible, framed by splashing white water. He had a wild look in his eye.

I grabbed him and pulled him along until the water became shallow enough for him to stand, then I let go and struggled onward. It was hard work fighting the current, and when we finally joined our dad on the other bank, we found that we had been swept some distance downstream from the lights.

But, sodden, we trudged back toward the little outpost. We arrived at a little cluster of buildings. Wearily, we filed up to the largest, and Dad knocked on the door.

It turned out that we had stumbled upon a dude ranch! The proprietors took us in and offered us seats by the fire, free dude ranch sweat shirts, and hot drinks.

Later, they gave us a ride back to the car. We marveled as we drove on what a great distance we had traveled by foot - it took quite some time to get to the car!

It has been about 35 years since we got lost in the mountains around Mystic Lake. But, we still bring it up from time to time. It has passed into Myers family legend, and I am glad that I was there that day to be part of the adventure!

~~~~~~~~~~~~~~~~~
I have prepared this post as assigned by Sandra's Writing Workshop! This week we were to write from the formal, first person POV. Click on the link and take a look at the workshop. It's a great way to improve your writing skills!

Link to Picture Source.
Posted by Libby at 9:49 AM