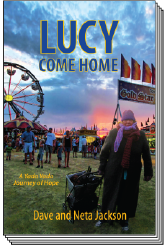 "Lucy Come Home," by Dave and Neta Jackson is the story of a young girl - and an old woman. The young girl and the old woman are actually the same person, because chapters in the book alternate between telling the stories of first a young girl in Depression- and then WWII-era America, and then an old, homeless lady in modern day Chicago.

How did that young girl become the old, homeless woman? At the beginning of the book, Lucinda - who alternately goes by both 'Lucy' and 'Cindy' in the book - is the child of extremely poor migrant workers during the Depression. The family is poor, but they are actually somewhat happy because they really love one another and the mother does her best to care for the family, even providing the occasional treat.

There is a bad character on the periphery of the family, and there is foreshadowing that lets you know that something bad is going to happen to Lucinda. Actually, it bothered me that I could tell that Lucinda was headed for some kind of disaster, because she was such a likable character.

Disaster strikes and her new boyfriend, Bo, is there with her when it hits. Bo and Lucinda are forced to run. She is separated from her loving family, and eventually becomes Lucy the homeless woman on the streets of Chicago.

But, Lucy had a loving family. As migrant workers, however, they had no permanent address, and so would be hard to trace. Read this book to see what happens at the end!

My opinion of the story is that it had it had a really creative plot, full of interesting twists and turns. The characters - other than 'the bad guys' on the edge of the story - are very lovable people. Lucy is actually very honorable, faithfully holding onto something that belongs to someone else over about a 60 year period. I would recommend this book as an enjoyable, quick read about a lady of great and interesting character!