Weekend Cooking - Suds in Your Eye! 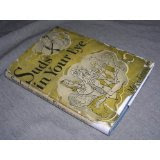 The "Suds Books," as we call them, have been in the family longer than I have. They were introduced to my mother by her grandmother. We call them the Suds Books because the first book is called "Suds in Your Eye." And, it is about how Mrs. Feeley, Miss Tinkham and Mrs. Rasmussen all came to live together in a house in San Diego called Noah's Ark.

This post was written as part of Weekend Cooking over at BethFishReads.com. Weekend Cooking is open to anyone who has any kind of food-related post to share: Book (novel, nonfiction) reviews, cookbook reviews, movie reviews, recipes, random thoughts, gadgets, fabulous quotations, photographs. If your post is even vaguely foodie, feel free to head over to Beth Fish Reads, grab the button, and link up anytime over the weekend.  (The button is on your right...) 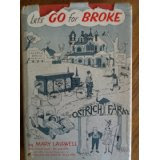 You can still find used copies of the series around the internet. There are more books than what I am showing here. All of the ones that I found on Amazon had five stars!

Here are what some Suds loyalists say on Amazon:

In 1956 I bought a used copy of this book in Colorado Springs. It wasn't a wonderful moment in my life and why I bought this little, worn book I cannot say. It might have taken me ninety minutes to read and the effect has held on for the last forty-four years and I expect it to retain its hold forever. Some years after that my Aunt played Mrs. Feeley in San Diego, and did so for several years. I was thrilled and she was amazed that I not only knew the character, but knew it better than she did. Read this book if you can get hold of it and be nourished, amused, amazed ( their brand of inventiveness is strangely missing today ) and wish you could pull up to the table and share a six-pack. Skoal! 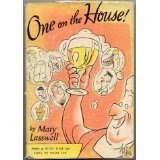 Mary Lasswell's 'Suds In Your Eye', is the comic tale of three lonely women, Mrs. Feely, the owner of the junkyard with a wall made of beer bottles, Miss. Tinkham, an unemployed teacher, and Mrs. Rasmussen, A Norwegian women who could make a wonderful meal with the simplest of ingrediants, who are united in the first of what became a very popular series during and after world war II. Miss Tinkham, a very shy spinster, and Mrs. Rasmeussen, who is abandoned by her children, come to room with Mrs. Feely in her Junk Yard called Noahs Ark, in San Diego before the War. They embark on several adventures and really become a family. The book illustrated by the late George Price, is a hilareous romp and is not afraid to be a bit racy for its time. The book had several sequels, including 'Tooner Trolly', was turned into a broadwya play and even inspired Mrs. Lasswell, A navy wife, to create a cookbook as written by Mrs. Rasmussen, 'Mrs, Rasmussen' Book of one Armed Cookery' -the other arm of course would be around a bottle of beer.


And, it is from "Mrs. Rasmussen's Book of One-Armed Cookery" that I bring you two recipes: Chicken Fried Steak and Zucchini Pancakes.

1 lb. round steak, 1 in. thick
Pepper, salt
Flour
Lard or Crisco to fry

Cut the steak into portions of suitable size. Pound well with a wooden mallet. Sprinkle liberally with pepper and salt, then dip in flour. Let stand a few minutes while the fat is heating. The meat will be damp on the outside: dip again in flour and rub well into meat. When the fat is very hot, drop the steak in and fry carefully until a golden brown all over. Reduce heat and finish cooking to any stage desired; rare, medium, or well-done. 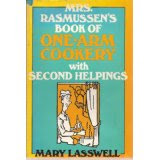 Stir in the vegetables and cook as for regular pancakes, making them very small. Delicious with fried chicken. 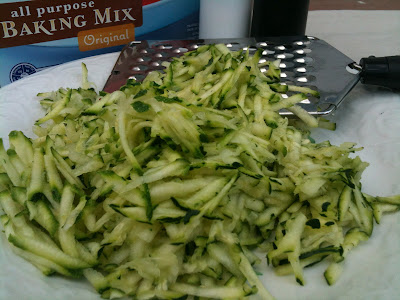 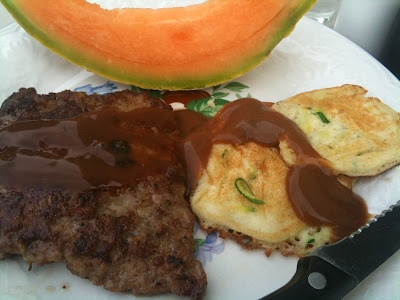 Note: I used some of the food photography techniques that I wrote about last week in shooting these last two photos. The main things that I did differently were, shoot the food on the back porch(!) and zoom in more tightly on the food. All of the book photos come from Amazon.