Once I figured out what was going on with the following passage from "Les Miserables," I ended up thinking it was hysterically funny! See what you think :)

"Cosette did not know what love was. She had never heard the word uttered in its earthly form. In the books of profane music which came into the convent, amour was replaced by tambour, or Pandour. This made puzzles which exercised the imagination of the great girls, such as; Oh! how delightful is the tambour! or; Pity is not a Pandour! But Cosette had left while yet too young to be much concerned about the "tambour." She did not know, therefore, what name to give to what she now experienced. Is one less sick for not knowing the name of the disease?"

OK, so the nuns don't want the girls singing songs about passionate love, so for the word, "amour," they substitute rhyming words. They use the words "tambour" and "Pandour." So what do those two words actually mean?

Tabour has several meanings, but I think the one meant here is a type of drum (think "tambourine.").

A Pandour is what is shown in today's picture. It/he is, according to thefreedictionary.com, "... one of an 18th-century force of Croatian soldiers in the Austrian service, notorious for their brutality [via French from Hungarian pandur, from Croat: guard, probably from Medieval Latin banderius summoner, from bannum ban1]." (Note about Pandour...if you google the word, you will see that there was a famous body-builder named Bobby Pandour. The internet is full of pictures of him in nothing but a fig leaf. So, when I first googled the word, I was confused and thought, "THIS is what the nuns had the little girls singing about?!?!?"

Which brings us back to our Les Mis quote...Hugo said that the great (or older) girls were puzzled. I would say so! The nuns had them substituting the words for "drum" and brutal foreign soldiers for the word "amour" in songs. The songs must have sounded completely crazy! LOL!

Wondrous Words Wednesday is hosted at bermudaonion.net. We talk about and share new words that we have come across in our reading - go over to WWW and check it out! 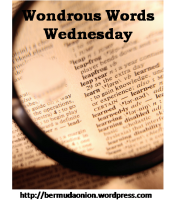