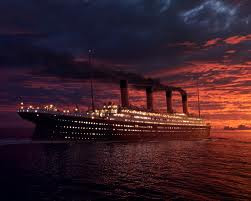 One hundred years ago tonight, "Titanic" hit an iceberg. Then, in the wee hours of the next morning, April 15, 1912, it sank.

The kids and I are going to watch "Titanic," the movie, tonight, and I thought it might be fun to make food from the era, or food that was actually served on the ship.

So, my first stop was the library where I was lucky enough to find "Movie Menus," by Francine Segan." She has written a book that features menus and recipes that "go with" dozens and dozens of movies. She was able to work with so many movies by the clever way that she organized the book.

The book is divided into sections of "like" movies. Here are the categories:


She has movies that fall into each category. For example - since this is what I was looking for - the category, "The Gilded Age," covers movies set during the Victorian and Edwardian eras, which includes the mid-and late-1800's up until the start of WWI. So, her section called the Gilded Age features menus and recipes that "go with" not only "Titanic," but also (for example) "The Adventures of Sherlock Holmes," and "Jane Eyre."

In this section, the author has included such recipes as, "Ginger-Lemon Ices," and "Peach Melba."

I am going to digress for a moment from my search for "Titanic" foods because I really like the section that Segan has written about the Middle Ages! At the beginning of each section of recipes and movies, she has a little write up about dining during that era. She tells us that during the Middle Ages the "no elbows on the table" rule arose because the tables were just planks on sawhorses and if you leaned on them they could fall over! She also tells us that the term "chairman" came into use during that era because he was the man that actually had a chair - everyone else sat on benches or stood!

OK, back to "Titanic." My friend, Whirly Girl, is a brand new book blogger. She has been reading Titanic books, and just reviewed a book called "The Dressmaker," that is set on the Titanic. She told me that they have actual menus from the night of the wreck. 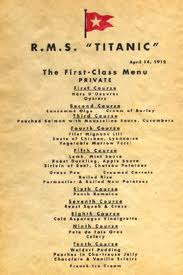 So, of course, I googled, and I found lots and lots of information about the food that was served the last night on the Titanic. In fact, they have found first-class, second-class and steerage menus from that night! There are a lot of articles on the web right now about this. 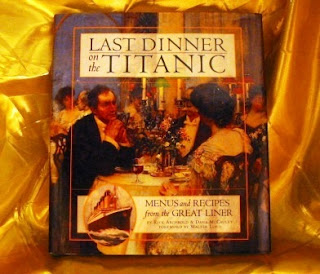 Rick Archbold and Dana McCauley have even published a book called, "Last Dinner on the Titanic." I cannot report on it first-hand (because I don't have it!), but here is what is written about it:

From Library Journal According to Walter Lord (A Night To Remember, LJ 10/15/55), April 14 finds many "sentimentalists" re-creating the Titanic's last meals. Now, with the help of research chef McCauley, Archbold (coauthor of The Discovery of the Titanic, LJ 1/88) reveals these menus to the population at large. A handsome gift book filled with photos, graphics, and Edwardian motifs, this work will appeal to foodies, Titanic buffs, and trend seekers. The recipes, taken from all five dining room menus, include delicacies like Quail Eggs and Caviar, Lobster Thermidor, and Oysters a la Russe; even the steerage "saloon" fare is formidable by present standards. There's also advice on how to host a Titanic dinner party complete with wardrobe and table-setting ideas, helping diners to feel like an Astor at the captain's table. With renewed interest and marketing of things Titanic in anticipation of the much-publicized film and Broadway musical (this year marks the 85th anniversary of the disaster), this book is surely the tip of the iceberg.?David Nudo, "Library Journal"

I still do not know what I am going to make for tonight(!) but there is certainly a lot of information out there! And, I still have "Movie Menus," which can be used for a lot more stay home "dinner and a movie" nights!
Posted by Libby at 8:42 AM