Golda Lox and the Three Bubbas 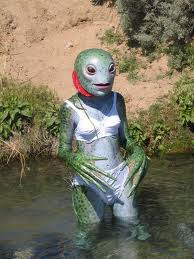 Once upon a time, there was a quality smoked fish product named Golda Lox. Now, Golda was a wild-caught salmon; she was not farm-raised. So, she was always running around, getting into trouble, doing things that she was not supposed to do.

One day she was walking through the neighborhood, and she noticed that someone had left their door wide open! From where she stood on the sidewalk, she could see that on the kitchen table, there were three bowls of cream cheese.

She went into the house, walked up to the first bowl, and gave it a taste. Oy Vey! Some Firshtinkiner had put pineapple in there!

Shaking her head, she went to the second bowl. She peered into the bowl, and shuddered a bit, and then walked away without a taste. That cream cheese had had a bit of green mold around the edges!

She walked over to the third bowl, and looked in with a bit of hesitation, having had the first two bad experiences. But, this...THIS...was cream cheese! Smooth, creamy, and white. She scooped up the bowl and went into the next room.

In the living room, predictably, were three bagels. These were large bagels, big enough for Golda Lox. Boldly, she walked over to the first, and biggest, bagel and folded herself down onto it. No. It was uncomfortable. It had clearly done some hard time in the toaster.

Sighing, she got up and slid over to the second, medium-sized bagel, and plopped down on it. They had the nerve to call this a BAGEL?!? This one was so soft that she sunk into it, and had a bit of trouble extricating herself.

When she finally got up she had become weary, and she dragged herself over to the final bagel. It was smaller than the others, but not too small. Gingerly, she tried it out...it was just right! She started spreading the cream cheese onto it with a butter knife that just happened to be leaning against an adjacent wall.

When she finished, she spread out on the bagel and cream cheese and went to sleep.

Golda Lox had no way of knowing it, but she had wandered into, and was at this moment asleep in, the house of the three bubbas (Yiddish word for "grandmothers."). But, a few minutes after she had fallen asleep they returned.

She did not hear them, as they clucked and lamented over the mess in the kitchen, and the fact that there had obviously been an intruder and that one of them - but which one - clearly needed to go out and find a policeman.

She slept on as the three proceeded into the living room and crowded around her. They began to talk about her, quietly at first, but soon they were talking rather loudly and with a good deal of animation. Golda slowly awakened, but she pretended to continue to sleep until she could figure out what was happening.

She listened to the conversation and realized that the three bubbas were trying to figure out whose son to marry her off to!

She sprang from her bagel and, disoriented, ran to the backdoor and not the front. The backyard was bordered by a swift river. But, that did not deter Golda Lox! Not for an instant. She jumped in and swam all the way home. Upstream.

photo: romairestudios.com I wrote this story to enter it into the Trifecta Writing Challenge! Click on this link and check it out! This week we had to put our spin on the story of Goldilocks ;) Didya like it?