You know what they say about too much of a good thing... I was at the grocery store three days ago, and they were practically GIVING away the Meyer lemons - 6 for $1.49! I wanted to buy all 30 or so bags, but since it was produce I restrained myself and bought 4 bags, for 24 total lemons. Let's look at them (for no reason - I just think they are pretty!) 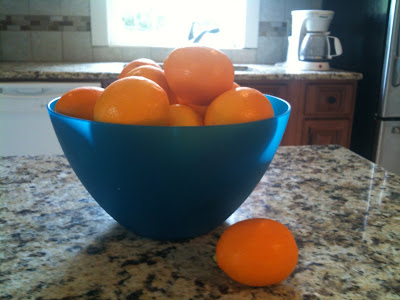 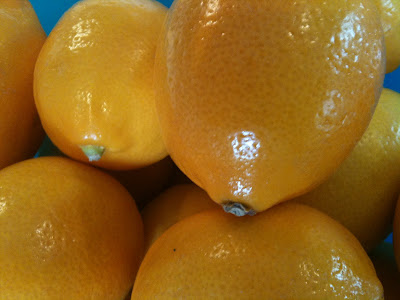 At first, I had fantasies about lemon curd and marmalade, but I discovered they were selling them so cheaply because they were starting to get a little soft - still good, but they could not wait around until I had time. So, I made up a recipe for two kinds of Meyer lemon popsicles! They turned out really well, so I am going to share the recipe with you. You obviously do not need to make such a huge batch - the recipe is very easy to divide. But, this allowed me to juice and freeze the lemons so that I did not lose them!

First, I made a simple syrup with 2 cups of sugar and two cups of water. (Again, you can use one cup of each if you have fewer lemons...) I brought this to a boil on the stove, watching it and giving it a stir now and then. You can see when the sugar is dissolved. At that point you can remove it from the heat and give it a few more stirs and set it somewhere to cool.

Meanwhile you can be squeezing the lemons. Mine were very seedy, so you will have to strain the juice. When the syrup is cool, mix it at a 1:1 ratio -- in other words, one cup of syrup for every cup of juice. Now you have Meyer Lemon Concentrate. 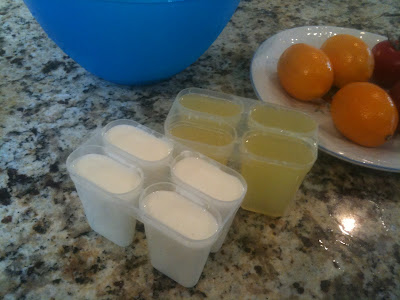 So, I did two different things with the Meyer Lemon Concentrate. They both turned out - but the second one was GREAT, and the first was just pretty good. 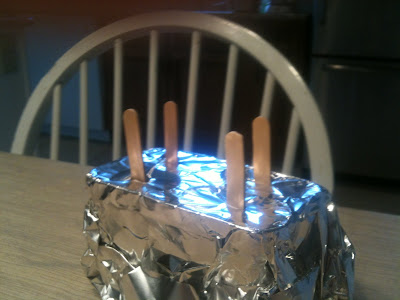 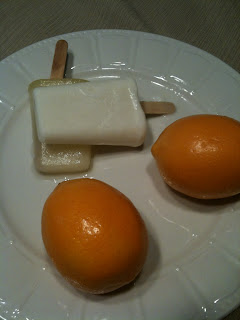 And, that is really it! I only had two sets of pretty small molds. But, the concentrate can be kept in the fridge for about three days or so, and that way you can mix up and freeze batches of popsicles and put them in individual zip lock bags.

Note that I did not use the plastic sticks that come with the molds. They are too short and they pull right out when you try to release the popsicles from the molds. I just got a package of sticks. To keep them from tipping over I cover the top of the molds with foil and put a little slit in their with a knife. To release the frozen popsicles, I run hot water over the bottoms of the molds until they release. You do not want to pull really hard on the sticks...
Posted by Libby at 8:40 PM