When I was a little girl, I read all fourteen of the original Oz Books by L. Frank Baum, and as many of the subsequent knock-off books as I could get my hands on. The idea of a hidden fairy land right here on Earth intrigued and delighted me!

According to Baum, the reason that no one had found Oz was that it was surrounded by the Deadly Desert that nobody could cross. If you think about it, the whole story of the Wizard of Oz is Dorothy trying to escape from Oz, where she has become trapped! 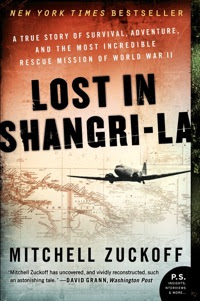 I received a book for review (FTC disclaimer: I was given a copy of this book in exchange for an honest review of it.), "Lost in Shangri-La," by Mitchell Zuckoff, and soon realized that - like Oz - it too was about a civilization that nobody knew about - well into the twentieth century! Instead of a deadly desert, this hidden land was surrounded by mountains and a jungle.

The hidden land in Zuckoff's book is in the interior of New Guinea. Here is how he describes it (pg. 22):

"Peering down through the cockpit windows, Elsmore and Grimes saw several hundred small, clearly defined native villages. Surrounding the native compounds were carefully tended gardens, with primitive but effective irrigation systems, including dams and drainage ditches. 'Crops were in full growth everywhere and, unlike the scene in most tropic lands, the fields were literally alive with men, women, and children hard at work,' Elsmore marveled."

It actually sounds a little Oz-like; except on the ground rather than Munchkins there were men in penis gourds. In case you haven't seen one before, a penis gourd is gourd that you wear on your penis. The natives wore them, and there are pictures...it's pretty odd.

"Lost in Shangri-La" is not just a story about a new civilization. It is an adventure story about a plane that crash lands there during WWII and the ensuing effort to rescue the survivors. The survivors are in the mountains surrounded by 150 miles of jungle on all sides and among these mysterious new people.

I do not want to spoil the story by telling you what happens. I will tell you that I liked the book...maybe a 4 out of 5. It is non-fiction, and I felt as though I learned about an important event in history that I should have learned about before now! I am glad that I read this book, and would recommend it.

I found this video on Youtube. The author made it - it's an over-view of the story!


This review is part of a TLC Book Tour!