I am reading "Wolf Hall" by Hilary Mantel! So far it is SO GOOD! I had read that her book, "Bring Up the Bodies" is one of the best books of 2012 (so far), but that it was a good idea to read "Wolf Hall" first. These are books about Tudor England - always a subject I enjoy! 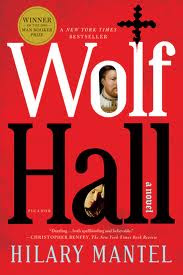 I am not too far into "Wolf Hall," but so far the only words that I have come across that puzzle me are "sweating sickness." Don't laugh! I know what sweating is and I know what sickness is! But...the two together? What does it mean? The book says that every few years the sweating sickness kills a lot of people in London and they die the same day they get it!

I read several articles and found out that nobody really knows WHAT it was. Here is an excerpt from Discover magazine, June 1, 1997:

"Medical historians have never known what caused the sweating sickness. That the disease was neither plague nor typhus was clear from contemporary accounts. Its victims bore neither the boils typical of plague nor the rash of typhus. Now physicians Vanya Gant and Guy Thwaites, both of St. Thomas’ Hospital in London, think they may have identified the killer. Sudor Anglicus, they say, may have been an early version of a disease that has made headlines in recent years: hantavirus pulmonary syndrome, which erupted in the Four Corners region of the American Southwest in the summer of 1993."

I have written this post so as to participate in Wondrous Words Wednesday at BermudaOnion.net.
Posted by Libby at 10:32 AM