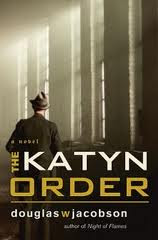 We all know from high school that as Nazi Germany was losing the Second World War, the Russians pressed in from the east, and the Americans, English, and French pressed in from the west. They all met in Berlin...the Battle of Berlin ensued...Hitler offed himself...game over.

But, within that sweeping saga, there were, or course, a myriad of sub-plots, that we may not have learned about. "The Katyn Order" is one such story.

Before I say anything else though, I have to tell you that this is not a history lesson (even though you will naturally pick up a lot of information along the way). I think that it can best be described as a thriller and a romance.

It is the story of a male and a female operative in the covert Polish army. They are trying to expel the Nazis from Warsaw toward the end of the war. Basically, they are wedged between two enemies - Germany and Russia.

Under desperate circumstances, a romance develops. It seems to me that these wartime romances are often very powerful because of the dramatic backdrop of the times...the adrenalin.

The two end up on a mission together - to find and retrieve the Katyn Order - an order by Stalin at the beginning of the war that called for the murder of 20,000 Poles. So, it really is an action-packed thriller, as the two race around Poland searching for the order and battling first Germans and then Russians!

I REALLY liked this book! I received it for free in the mail in exchange from an honest book review on my blog, and I have to say that it one of the most well-written of this type of book that I have gotten.

The transitions from one character's story and another are very smooth...actually the whole book is very smooth. It flows well with no choppiness. The characters are believable and complex. I came to really care about 'the good guys.'

I feel as though the cities of Warsaw and Krakow were characters in the book. Warsaw was leveled by the Germans because the people did not surrender, where Krakow's buildings mostly survived. I did some checking and have found that, happily, a lot of Warsaw has been re-built in its original style.

I would definitely recommend this book to anyone interested in thrillers, romances, or WWII-era history!
Posted by Libby at 8:44 AM