This is Chapter 10 of my novel, "Bath Salts." I am entering this post in the challenge at TrifectaWritingChallenge.com where we are to enter a tale of between 333 and 3,333 words.

I am also hooking up with Sandra's Writing Workshop.


CHAPTER 10 (BATH SALTS!)
“How much further?” Randi called to Donovan. They were east of the interstate, driving through what seemed to be endless orange groves. They were on a two-lane country road; the lanes were narrow and the rig took up most of both lanes.
“I’m not a hundred percent sure. I never visited this guy – we don’t hang out.” Donovan replied. “I knew who he was in high school. We were in a couple of classes together. He was a really weird guy. He was really low class and filthy, but you could tell that he was also really smart, but in a creepy way…”
Matt interrupted. “Look. Y’all see that smoke up ahead?”
“Yea, I wonder what that’s all about,” answered Donovan.
As they drove on, a rising cloud of smoke became more and more visible. Suddenly, a battered light blue pickup truck came barreling toward them from the direction of the fire.
“That may be your friend now,” Matt drawled.
He stopped the big rig in the very center of the two-lane road so that the pick-up would not have room to go around on either side. There were deep ditches on both sides of the road, but Mike was not taking any chances of the truck going around him, opening his door, he stepped out onto the semi’s metal stair, and using the door as a shield he looked out the open window and raised his pistol.

Donovan had taken the same stance on the other side of the truck. In front of them, the pickup skidded to a halt. Caroline could see the terrified and confused look of the driver, Billy Knowles, an unkempt, overweight man in his mid-twenties.
Billy threw the truck into reverse and started to speed away from them backward. Matt and Donavan got into the rig, and started after him.
Billy sped backwards and had almost made it to the scene of the fire when he crashed into a particularly deep stretch of ditch on the left side of the road.
He was not hurt, but he was dazed. By the time he got out of the pickup and started to run, Matt and Donovan were out of the rig and after him. He ran into an orange grove and they were right behind him.
“Oh my God, I can’t believe this!” Caroline cried. She and Randi were standing, crouched, in the cab between the two front seats watching the men disappear into the grove. “Should we go with them?”
“I think we should stay,” Randi replied. “We don’t have guns. Bath Salts guy probably has one; I mean...he’s a drug dealer.”
Randi sat down in the passenger’s seat and went on Twitter on her phone.
“Holy crap!” she exclaimed to Caroline, “Venice is totally trending!”
Caroline hit the Twitter icon on her own phone. #Venice was trending, and so were #Zombieapacolypse and #Cannibals.
Meanwhile in the orange grove, Matt and Donovan were running after Billy. The trees in the grove were planted in rows, so they started up the same row. But, when they came to a gap where there was a tree missing, Donovan cut over to the next row, while still in pursuit.
“Billy!” called Donovan.
Billy glanced over his shoulder at Donovan. Without slowing down or raising his gun he yelled, “What do you want?!”

“Answers!” Donovan yelled back.
Billy stopped running and set the gun down near his own feet. Matt and Donavan ran up to him.
He was still doubled over from having set the gun down. He was huffing and puffing with his hands on his knees. “Let me…catch my breath.”
Matt and Donavan stood quietly for a moment. Then Donovan said, “Was it you? Did you put the Bath Salts in the water supply?”
Billy was red-faced and still out of breath. He shook his head ‘No’.
He stood up.
“I remember you, Donovan,” he gasped. “Heard you was a Navy Seal now.”
Donovan nodded.
Billy continued. “No, I didn’t do it. It’s this dumbass named Arnold Hucknett. He told me was going to retire from the City and be a distributor. He said he was having packaging printed up and everything, real professional.”
“I sold him ten huge buckets of the stuff…I didn’t know,” Billy wailed. He started to cry.
Matt and Donavan looked at one another, embarrassed.
“Where is he now, Billy?” Donovan demanded.
“He…he works for the City at the Water Department,” snivelled Billy. “I guess that’s how he done it.”
“I know he lives in the Venice Palms apartments, but I honestly don’t know the apartment number. I never been over there. He has a beat up white pickup with one of those fiberglass bed covers that have the door in back.”
Billy continued. “Look…I didn’t know about the water supply. I would never have sold him the second batch. I heard about the water supply just about five minutes after he took off outta here with the second batch.”
Donavan eyed him sharply. “What do you mean – second batch?”
Billy started babbling again, “I had no idea…”
“Look, cut to the chase, and quit making excuses. We want the short version,” Donovan commanded. 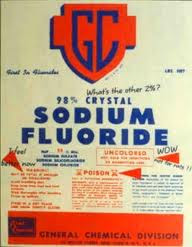 Billy seemed to pull himself together. “He had plastic buckets. They were empty fluoride buckets from the water department. I thought he was just recycling. Maybe I should have…”
“The short version!” barked Donovan.
“Ok, he had ten buckets. He took the two that I had ready last night, and I worked most of last night and got the other eight ready. He came and picked them up just a little while ago. After that is when I…I heard the news on the radio about the water supply. “ Billy hung his head and continued. “I put gas on everything and torched it. Then, I took off, and that’s when I ran into y’all.”
Matt and Donovan looked at one another. Donovan turned back to Billy. “Where’s he going?” he demanded.
“I don’t know!” Billy wailed.
“Do you have any idea how much trouble you’re in already?” Matt demanded.
Billy nodded sadly. “He…Arnold…he was talking about Heidi. She lives in Miami. I think she dumped him. He’s all pissed at her.”
“Billy, do you think he’s going to Miami?” Donavan said with surprising gentleness.
Donovan nodded. “Yea, he was going on and on about getting even with Heidi when he left and after that when I heard what he did in Venice, and he had already left with eight more buckets, I was thinking that he would probably do Miami next.”
“Oh my God…” Matt murmered.
“Let’s go!” said Donovan turning to go back to the truck.
Matt nodded and started after him. “What about Billy?” he called to Donovan.
“His house and lab are burned and his truck’s in a ditch,” Donovan answered back over his shoulder. “I don’t think he is a threat to anyone anymore.”
At that moment, they heard a gunshot behind them. Matt spun around, and Donovan dove for the ground while simultaneously looking back to see what was happening.
They watched as Billy’s body collapsed among the orange trees. The hand holding the gun dropped to his side and then his whole body and what was left of his head slowly went down.
Donovon rose to his feet and dusted himself off. “That’s probably for the best,” he said quietly. “Come on.”
And the two ran back toward the rig.