I am reading Les Miserables as part of the read-along at http://kateslibrary.blogspot.com/. There is a button in my right column. At the same time, I ALWAYS love participating in Weekend Cooking at Bethfishreads.com (another button to the right).

During my reading of Les Mis, I accidentally stumbled upon a way of combining the two! Here is what happened...

I was reading a passage about a group of young students, as follows, "He was, moreover, one of the students who had learned most during their course in Paris; knew that the best coffee was at the Cafe Lemblin, and the best billiard table at the Cafe Voltaire; that you could find good rolls and good girls at the hermitage on the Boulevard du Maine, broiled chickens at Mother Saguet's, excellent chowders at the Barriere de la Cunette, and a peculiar light white wine at the Barriere do Combat."

I paused there in my reading because I thought that it would be fun to see whether any of those places in Paris were still around!

I googled that passage...and ANOTHER TRANSLATION of Les Mis popped up. It was the same, except the roasted chicken was now called "spatchcocked" chicken and chowder was called "matelote." Now I was really curious! Spatchcocked chicken is a type of butterflied chicken. I talked about it on Wonderous Words Wednesday this past Wednesday if you want to take a look...there is a great video of someone expertly spatchcocking a chicken.

Next, I had to figure out what a matelote was. I googled that, and it turned out to be a dish made of fish, wine, mushrooms, and pearl onions. I found the recipe and made it!

The recipe can be found at www.soupsong.com

Fry the bacon in a large saucepan. When crisp, remove the bacon and reserve. Add the onion and garlic to the bacon grease and saute until tender. Pour in the wine and the stock, add the parsley, thyme, bay leaf, pepper, and allspice, bring to a simmer and let it cook for 30 to 45 minutes.

While the soup is simmering, prepare the remaining additions. First, put the little onions into a pan of boiling water and cook them for a few minutes. Drain--the peels will come off easily. Melt a couple Tablespoons of butter over a medium high heat in the same pan (water poured out), then add the mushrooms and toss until they are nicely browned. Remove them to a bowl. Add more butter to the pan and throw in the peeled onions, tossing them until they are patchy brown. Add them to the mushrooms. Deglaze the pan with water and pour all that brown goodness into the simmering broth.

When 15 minutes away from serving, bring the soup to a boil and add the fish. Let it boil slowly for 8-10 minutes, until the fish is just done, then remove the fish to a serving tureen and keep warm. Scrape the onions and mushrooms into the broth, turn to a high heat, and boil hard for 5 minutes to reduce the soup and concentrate its flavors. Pour over the soup, garnish with the buttery canapes, and serve immediately. 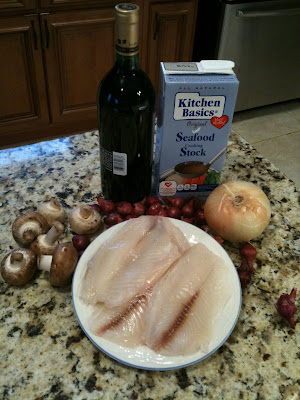 The onions turned out to be a fun surprise! I had not worked with unpeeled pearl onions before, and thought that it was going to be a lot of work. But, as you can see, I followed the recipe and boiled them in their skins for a while. The water turned a lovely color, and I remembered that in days gone by onion skins were used to create dyes. When I was done boiling them, I threw some ice cubes on top. When they were cool enough, I squeezed them and they shot right out. It was fun. And, look how pretty they were! 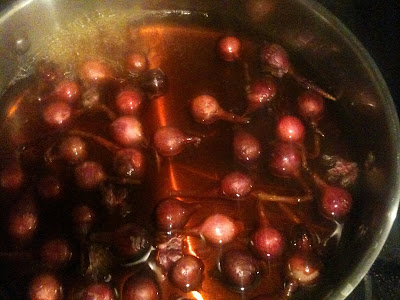 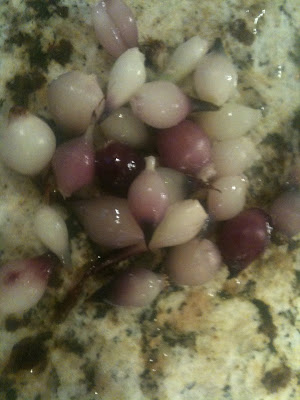 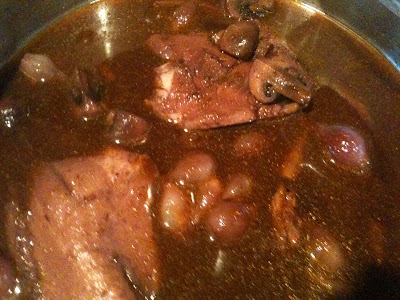