"Islands in the Stream"

Islands in the Stream by Ernest Hemingway

I am a huge Hemingway fan. My parents were actually introduced to one another by a mutual friend who was a Hemingway scholar. So, I feel as though I owe Ernest my LIFE(!)

His book, "Islands in the Stream" is one of the posthumously published ones. I really liked it - five stars. Knowing what I do about his life, it seems to be very autobiographical. As the book starts, his protagonist, Thomas Hudson, is living on Bimini. He is a painter. His three sons - one with his first wife, and two with his second - come a visit him.

I know that Hemingway also had three children from his first two wives. In addition, when Thomas Hudson reflects in the book, you see that he now knows that his first wife, "The Paris Wife," (if you will) is the one that he always loved. And, I think that this may be true of Hemingway, as well.

The first section of the book is entitled simply, "Bimini." Hudson plays with the kids, fishes, eats, paints, and drinks this concoction that he developed. Hemingway keeps mentioning it. Thomas Hudson's drink of choice consists of coconut water, lime, angostura bitters and gin. By the third or fourth time that the drink was described I was FORCED to go out and gather the ingredients.

When I got back to my book, I sipped/swigged along with Hudson and enjoyed the rest of the book.

The second section is called, "Cuba," and the third is called, "At Sea." I cannot tell you too much about what happens in these two sections without creating spoilers. But, I can tell you that the flavor is tropical. It is a great summer read, but also a great winter read if you are up for a little armchair traveling.

I can also mention that the in the section called. "At Sea," Hudson is hunting German U-boats in the Carribean(!) Did you know that there were U-boats in the Carribean during the Second World War?!?! Seems a bit close for comfort...but, I did independently verify that that did indeed occur. So, the third section, in addition to the wonderful tropical vibe, also has good action and adventure.

Below, are some shots of my "Islands in the Stream" cocktail being concocted: 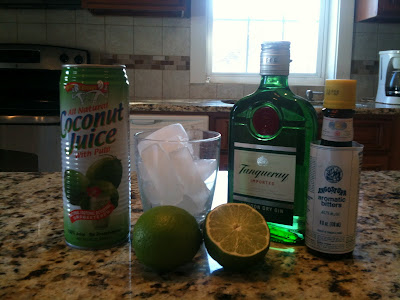 Try to find coconut water that has 'pulp.' The pulp is little cubes of young, soft coconut. I tried to take the final picture of the drink so that you can see the coconut. Also, I do not have any measurements because there were none in the book. Just mix it like you like it! Although Hudson says that the angostura should make the drink look "rusty." So, you need three good 'glugs,' I think. 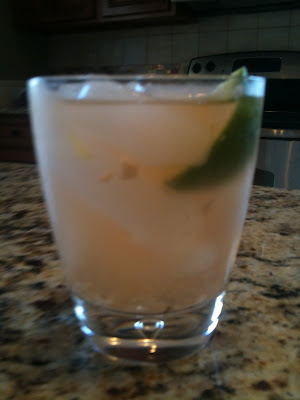 This post was written as part of Weekend Cooking, a weekly meme hosted by Beth at Beth Fish Reads. Weekend Cooking is open to anyone who has any kind of food-related post to share: Book (novel, nonfiction) reviews, cookbook reviews, movie reviews, recipes, random thoughts, gadgets, fabulous quotations, photographs. If your post is even vaguely foodie, feel free to head over to Beth Fish Reads, grab the button, and link up anytime over the weekend. (The button is on your right...)

I am linking this post to Novel Food at briciole.typepad.com. I was sooo excited when I stumbled across their concept! They put together blog posts of food derived from novels that have been cooked up and photographed by bloggers all over the net! You should check it out!

Finally, I am uploading this song for you. It has nothing to do with the book; but, I know this is what you thought of when you read the title! (If you are my age!)
Posted by Libby at 2:56 PM

Email ThisBlogThis!Share to TwitterShare to FacebookShare to Pinterest
Labels: Hemingway, Islands in the Stream, juice and gin