"And the Ladies of the Club"

The Flood of 1913 is the worst natural disaster to hit Ohio in recorded history. "And the Ladies of the Club" tells about the disaster and how the people of the small fictional town of Waynesboro (based upon 'real life' Xenia, Ohio) face the disaster and re-build in its aftermath. When I got to the flood chapter in the tome, I could relate. Look what we have right off of the fire escape in the apartment where I have been staying in Loveland, Ohio...its a bit hard to make out the words - its been out in the elements for 99 years(!) 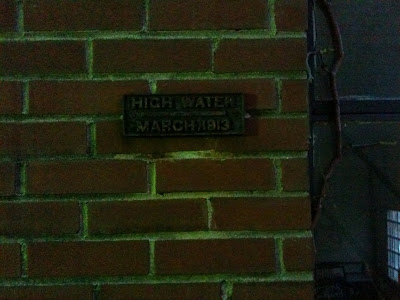 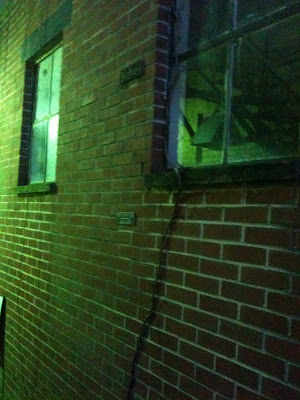 The old brass sign shows the 1913 high water mark, and one from the 1950s (a plasic sign!) can be seen below it in the second picture. The lower sign is right about at my face level, so say about 5 feet off the ground. So, I would estimate the 1913 line is at about...8 and a half feet or so! >

"And the Ladies of the Club" spans the time period between 1868 and 1932. So, it was about a lot more than just the flood, but I wanted to tell you about that first because I love it when the lines blur between real life and 'book life!' >

The book starts when our two main protagonists, Anne and Sally, are asked to join a ladies club. The civil war has just ended and they are young girls just graduating from a local women's college. They accept and start going to club meetings once a month. Anne marries a man that she has been interested in for some time, while Sally is swept away by the handsome civil war veteran, Captain Rauch, and marries him. >

Captain Rauch adds depth to the story because he is very involved in Republican politics, and we learn about what is going on nationally based upon what he is doing. I probably learned somewhere along the line in school that most of the presidents after the civil war were Republicans, many were from Ohio, and were civil war veterans. But learning about it in the context of the story it all makes more sense and I retain it more. >

I also learned how southern Reconstruction was used as a political bargaining chip and essentially traded away. You know, I never before understood how the north had beat the south and the slaves had been freed, but they had NOT really been freed. All that bloodshed, and the slaves were not given full rights for another hundred years...this book helped me to understand the big picture because I saw what was going on in the Republican leadership from the viewpoint of a character that I knew and cared about. >

The same goes for the assassinations of Presidents Garfield and McKinley. I KNEW about those, but "living" day to day with the people of Waynesboro in the context of the book made me understand what it was like in the country when that happened. >

Likewise, the book spans the WWI time period. Of course, the setting is Ohio, but we see who enlists from Waynesboro and what becomes of them, and how the waiting is for the "folks back home." >

Lest you think that this is a book about politics, rest assured that there is a lot of well-written human interest in the book as well. Anne and Sally's kids and the daughter of another "lady of the club," get involved in a very engrossing love triangle. And, we get to see Anne and Sally go from essentially girls to being the grand matrons of the club as old women. >

We learn a lot about the families, children, and grandchildren of the members, and that is a great segue to introducing you to the author who is herself a club lady descendent, Helen Hooven Santmyer. Ms. Santmyer was 87 when the book was published in 1982! They say that she checked the papers every Sunday to see whether it was still at the top of the NY Times best seller list. I think she did a great job on this 1300 page book! I give it 4 out of 5 stars! >

I read this book to further my "War Through the Ages Challenge," "Historical Fiction Challenge," and "Chunkster Challenge" goals. Press the buttons in the column to the right and see what these challenges are all about! They are a lot of fun and very motivational!
Posted by Libby at 12:54 PM

Email ThisBlogThis!Share to TwitterShare to FacebookShare to Pinterest
Labels: And the Ladies of the Club, Flood of 1913