When I was a kid, my mom belonged to the Time-Life Foods of the World Cookbook Club. It was so cool...

To set the stage a bit, this was pre-internet and there was no cable TV or VCRs, and as far as video games go, well 'Pong' had not yet been invented. I know, I know, it sounds like a long time ago. But, it really was just like it is now - imagine that your cell phone has been stolen and your cable and WiFi are turned off. It was just like that!

So, imagine how excited I was every month when these great books showed up! Every month there was a book about a different country or region with lots of pictures and information and recipes! 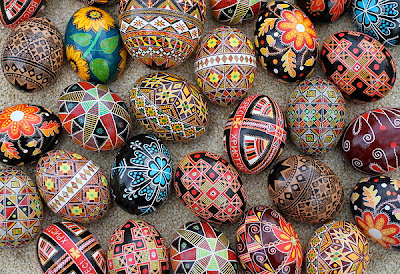 When the "Russia" book showed up I remember I spent a long time drooling over the cover picture of Pysanky eggs. Here is how Wiki describes them, including a pic from the article: "Pysanky –from pysaty (писати), "to write"– are raw eggs created with the wax-resist method (batik). The designs are "written" in hot wax with a stylus or a pin-head. Wooden eggs and beaded eggs are often referred to as "pysanky" because they mimic the decorative style of pysanky in a different medium." I was DYING to make them.

When the Provincial France book showed up, I actually DID make a souffle!

When the Vienna issue came, I studied all the different types of cakes and pastries, right out of Alice's tea party. I was particularly interested - and still am to this day, as a matter of fact - in old wooden molds that they showed that are/were used to make cakes and cookies with raised pictures on them. I have since found out that these are called 'springerle' molds. I found a fellow blogger that did a posting on them, along with lots of VERY COOL pictures...pls check it out! http://bakeryboyblog.wordpress.com/2011/12/23/springerle-cookie-molds/

Below are some pics of some random used books from the collection that are for sale on Amazon. I believe those are Japan, France, and the Middle East. Next to it is a button to buy one of the three entire sets that they have. To be honest with you, I am enjoying trying to put a set together little by little by finding the books here and there at thrift stores, etc.

Does anyone else remember these from 'back in the day?' 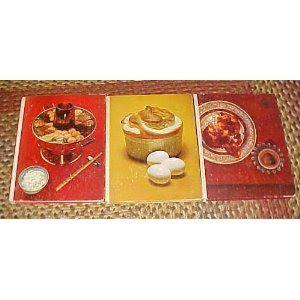