"The No. 1 Ladies' Detective Agency" by Alexander McCall Smith 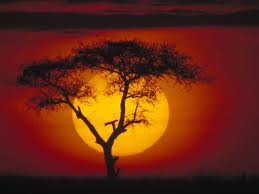 I found a copy of "The No. 1 Ladies' Detective Agency" in the waiting room at my dad's office one day when I was, well, waiting. (I love it when I come across a new book serendipitously, and my dad let me take it home!) What I liked about the book was that it was immediately engrossing and a very easy and enjoyable read.

The story is about a woman named Precious Ramotswe who sets up a detective agency in a place called Gaborone. Each chapter is about one of her cases and the clever way that she solves it. Although Precious does not have training, she has the natural instincts and creative problem-solving skills that make her a really great detective, and it is a lot of fun to see her in action!

In addition to the actual cases, I also really liked reading about the town of Gaborone, which is in Botswana. I knew NOTHING about Botswana before, nor about most of sub-Saharan Africa to be honest with you. But, the way that author Alexander McCall Smith writes about Botswana makes it sound wonderful, and like a place that I would like to visit. A look at the dust jacket shows that Smith taught law at the University of Botswana - the fact that he has lived there really comes through in his writing.

Good books often stir me to learn more about their settings, and "The No. 1 Ladies' Detective Agency" is no exception. During the course of reading it, I dragged out a map of Africa. Botswana is just north and a bit east of South Africa. The acacia trees that are mentioned in the book look like this beauty that I copied from randomrantcat.blogspot.com Very evocative of Africa - don't you think?

Another interesting thing is that Mma Ramotswe (they use Mma instead of Mrs. and Rra instead of Mr.) sips something called Red Bush Tea as she is solving her cases. You can get some and sip along as you read the book! Tazo makes it and Twinings has Rooibos tea, which is apparently the same thing. As a bonus, they are purportedly high in anti-oxidents. I find it easier to immerse myself in a book if the heroine and I are sharing the same drink ;) I found out that Smith has written several sequels and that one of them is called "Tea Time for the Traditionally Built." Love it! First, he includes a reference to the ubiquitous red bush tea, and then he refers to a large woman as "traditionally built!"

I will definitely read several of the sequels (while drinking red bush tea) and report back to you. I think I may dabble in a few of Smith's other series, as well. He has one called the Portuguese Irregular Verbs series (don't know a think about it yet, but it sounds intriguing...) He also writes the 44 Scotland Street series.
Posted by Libby at 12:25 PM